For the first time ever, a Wetskills Water Challenge was organized in Bangladesh! Through cooperation with the Bangladesh University of Engineering and Technology, and the CORE project for Community Resilience for flood protection in urban delta areas, Wetskills was in Dhaka and Sirajganj with a programme from June 30 – July 12, 2019.

Central theme was flood resilience during the monsoon season in Bangladesh.

This edition of Wetskills brought together international participants and took place in the capital city Dhaka and the rural city of Sirajganj where the CORE pilot project is developed. The event was organized in close cooperation with BUET and the Dutch partners in the CORE poject (IHE Delft, HKV Consultants and several SMEs).

The finals were organized in Dhaka on the 12th of July.

Wetskills leaflet and track record since 2010

Flood modeling in Bangladesh is often compromised by a severe lack of data. Furthermore, local conditions change frequently, which impacts flow patterns for sub-critical events. While remote sensing imagery is available at an increasing level-of-detail, local surveys remain necessary to provide the data required for a detailed digital terrain model which is essential for overland flood modeling. Current advancement in drones and photogrammetry improve the coverage and processing of local terrain surveys tremendously. In this case, we develop and test the workflow for a drone-enhanced local flood model in a peri-urban area. With the drone we will fly the pilot-area. The resulting pictures can be used to produce a Digital Elevation Model (DEM). How can an accurate DEM be produced, based on drone-enhanced images?And how can drone-taken pictures be processed into a video for communication purposes? 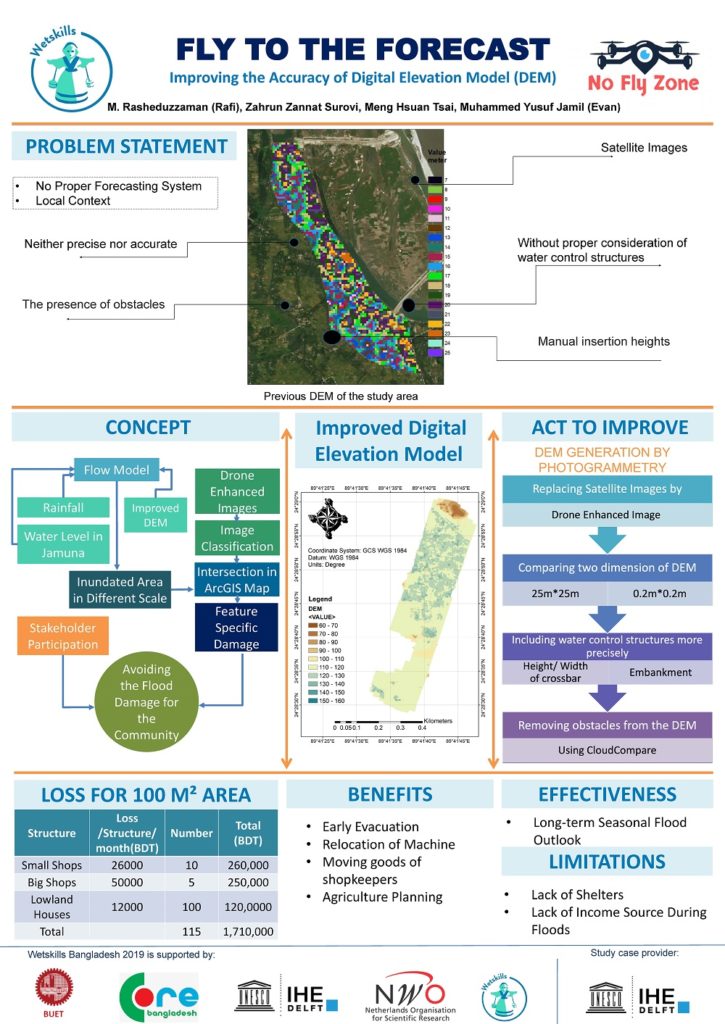 While developing flood resilience at community-based level requires an ensemble of socio-technical measures, one of the major needs in poor peri-urban communities is the development of flood proofing kits to retrofit existing houses. Although varying in size, most peri-urban houses consist of a clay floor, a bamboo bearing structure and galvanized steel cladding, which makes them vulnerable to floods. As communities are poor, this subsequently means that resources to change or adapt the housing situation are very limited; relocation is often not an option while building a more durable, flood resistant housing type is financially infeasible. The only remaining option is to retrofit the existing houses to at least protect them against frequent flood events with limited inundation depths. The task in this case is therefore to develop proposals for flood-proofing these houses, by developing a retrofitting kit that is effective against medium inundations, is easy to construct, can be applied to an existing house and is cost-effective. 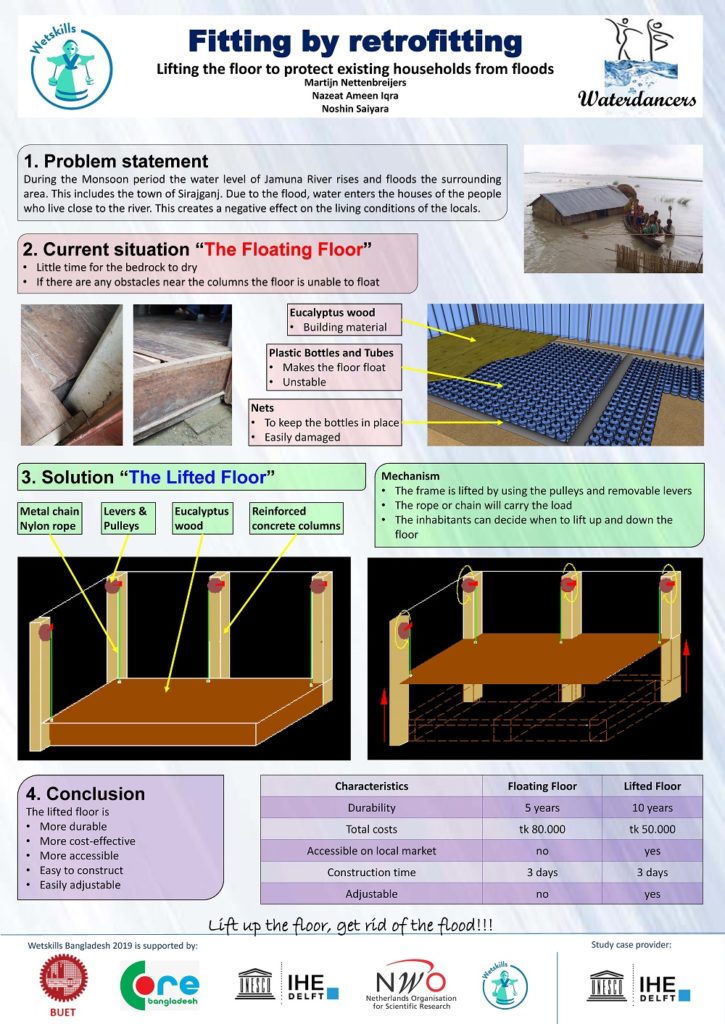 Case 3: A systematic approach to determine the effects of the Restoration of the Old Brahmaputra river

Restoration of the flow of the Old Brahmaputra river can result in significant social, environmental and technical effects. The goal is to determine these effects on a primarily qualitative basis, looking at the river from a systems perspective, thus taking into account dependencies between various disciplines and actors. What does this restoration entail from e.g. a hydrological perspective? How can local communities along the river benefit from a restoration? What are the (changes) in the ecosystem services? And what does the restoration mean for the river system itself? In Bangladesh, many peri-urban areas are exposed to floods during the rainy season, often lasting for weeks or months. Although communities are often haphazardly adapted to these flooded conditions, the provision of adequate sanitation is a continuing worry. Yet, it is one of the key factors in limiting water-borne diseases that typically affect the urban poor during the wet season.  How can we design flood-proof sanitation for these communities, as well as additional vital services (e.g. water supply) in a robust, cost-effective manner? It should be easy to maintain, and using local materials and construction techniques. 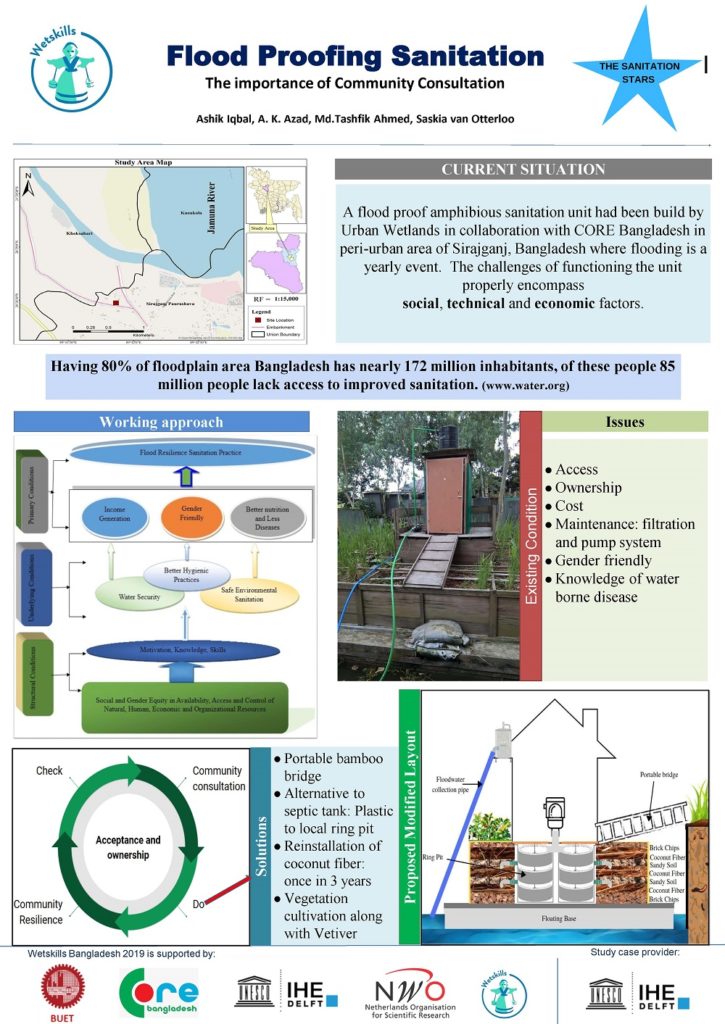 About the CORE project (overall project for this Wetskills event)

This project aims to develop prototypes of community-based flood mitigation and adaptation measures in specific case-study towns/neighborhoods (so-called Learning Spaces) in the Bangladesh delta, and to develop a framework for up-scaling and integration these measures into larger flood-risk mitigation schemes.

The effectiveness of flood-risk management in The Netherlands depends on effective stakeholder coordination through governance arrangements developed over many years of coping with floods. In this research project, we will repeat this process on a shortened time scale, and aim to develop coordinating capabilities in flood-risk management for the urban poor in a developing country. We will initiate and support community-based innovation, development, production, and implementation of small-scale technical innovations that alleviate immediate flood-related nuisance (‘wet feet’) in a town in Bangladesh, with the aim to increase coordinating capacity for flood risk management and focus this emerging governance capacity on developing ever longer term, severer risks, increasing scale and more sustainable solution for flood risk management. Our research in this Learning Space addresses a major knowledge gap on how community based flood mitigation and adaptation measures both technological and institutional develop into ‘measures of scale’. This will enhance flood resiliency through demonstration and subsequent development of knowledge co-creation in collaboration with local partners and ultimately integration in flood management policies.