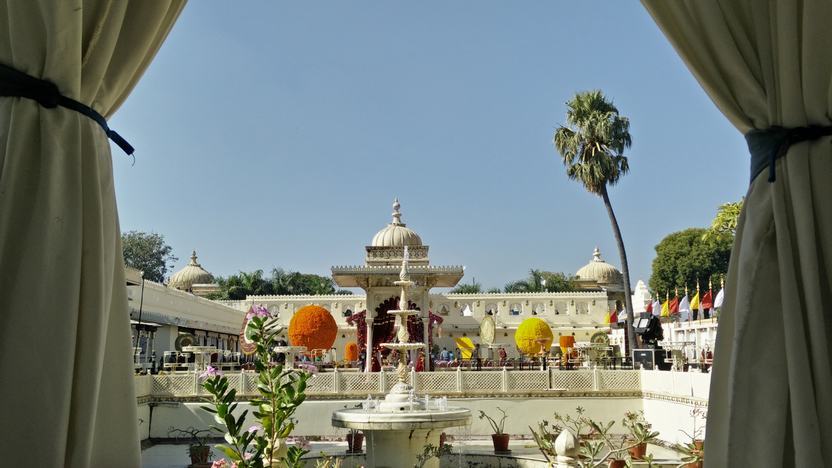 The main tourist attraction in Udaipur is the City Palace, on the shores of the Pichola lake.

The main tourist attraction in Udaipur is the City Palace, on the shores of the Pichola lake. From our hotel the easiest way was to go by rickshaw. Unlike in Ahmedabad, the rickshaw drivers in Udaipur are very sly as their main income comes from tourists. Their opening price for western tourists would usually be 100 Rps. /€ 1,40. By stretching our hand forward slightly below our wrist we stopped the first rickshaw. He indeed asked for 100 ₹ for the 800m ride. This was far too much – we promptly refused and said the fee was far too high. Then he conceded to charging 50 ₹ instead. Again we told him it was still too high. Because we knew he wouldn’t just give in, we walked away. As we walked away, the driver came to us again and gave a new offer: 30 Rps. /€ 0,40.

Instead of going directly for the City Palace, we went on to the boats that would take you to the Summer Palace/Jagmandir. This is a palace and garden in the middle of the Pichola lake, and the only way to get there is by boat from the City Palace. Think Venice, add more movement to the water, more palaces, more Indians and less people. That’s what you can imagine a boat ride from the City to the Summer Palace in Udaipur to look like.

The Summer Palace itself was very open. The rectangle-formed island was surrounded by a decorated white wall. Inside that wall you could find the palace, a coutyard and a garden. While the palace was off-grounds and we didn’t have enough time to see the garden, the courtyard was being prepared for a wedding. There were flowery decorations, gold and red chairs were being prepared and lanterns were put into the trees.

Then we went on into the city palace itself. The City Palace contained several exhibitions, and was five storeys tall. The architecture was amazing. Marvelous arches and decorated beams all over the place. But the best part was the stunning view. From the backside of the palace you could see the lake in a great panorama, and at the front you could overlook the entire city. Afterwards I decided to explore back-alleys, as this is a favourite thing of mine to do. It offers a look into the cities regular life, and frees you of most of the selling Hawks. The alleys were very narrow. A car wouldn’t fit in, but motorbikes could. The buildings were also pretty, mostly made out of wood.

On our way back to Ahmedabad we stopped at a highway hotel for a toilet break. Highway hotels here consist of three things; a small cafeteria, a small shop with toys, food and beverages, and a (usually very dirty) public toilet stall. I’m still not sure wether there is an actual hotel attached to these things, but this is the setting.

At this particular stop, there was an Indian family of about eight people as well. They had a little girl with them, probably about eight years old. In India, and especially the less touristy places, white people are an exception. This means people, and especially kids, will stare at you. If they’re brave, they might come up and ask to take a picture with them. Some others prefer sneakily photographing you. The little girl was really shy, but her parents gave her the courage to ask us for a picture. First with Johan, and later with Karin and me. In return Karin wanted to take a picture with the girl as well, to which the girl responded enthausiasticly. When the family left the parking lot, we waved. They grinned and waved back.