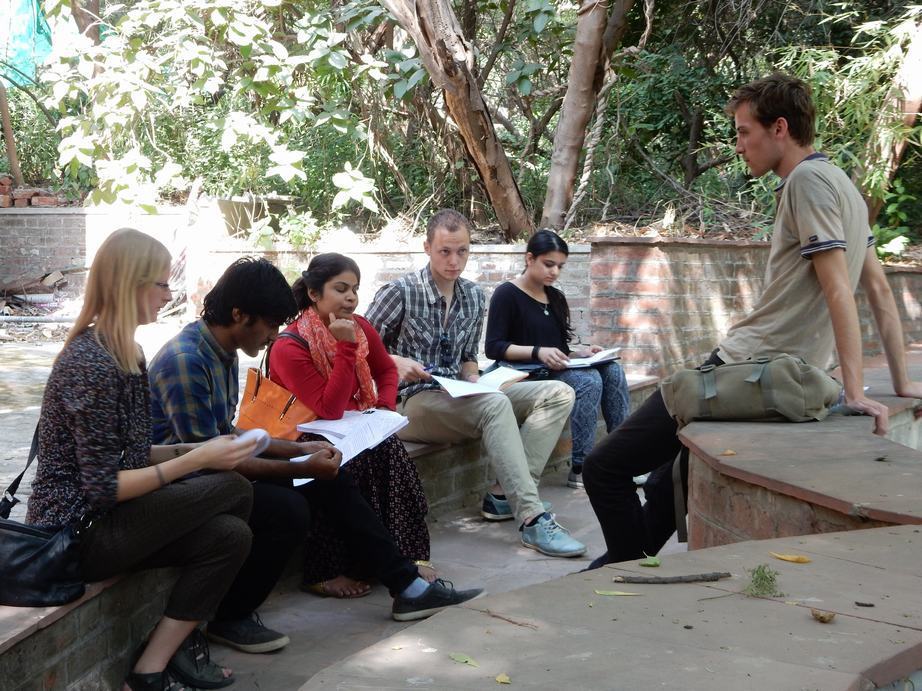 On Friday, our group was the only one to stay at CEE in Ahmedabad, at our temporary home far away from home.

One of our team mates is from this city, and so she invited us to not one but two Gujarati meals, made with the help of her lovely sister at their family home in a quiet neighbourhood in the city (a very rare thing in a city of 6 million people!). After eating, we used our free time to start thinking about solutions to the challenge of our group. How can we be inspired by the old traditional structures to collect water in private homes and public spaces, and create something new based on this which can be used in modern times? After a fruitful brainstorming session, we decided to return to the campus and then the only truly exciting event of the day happened: we were almost hit by a running cow which came towards our car at full speed. A big one. With horns. Some outstanding reflexes of Akruti meant that the day didn’t end in the hospital.

In Ahmedabad, water used to be collected using the roofs of the houses, which then flowed towards a private storage tank underneath the house. This water was used as drinking water. There were also public water supplies: stepwells and artificial lakes. the first also provided drinking water, while the second was used for bathing, drinking water for animals, and washing of clothes. Because of increased pollution and population pressure in the city, the lakes do not function any more, while the drinking supplies are mostly not used by the inhabitants of the houses and the stepwells have fallen dry. At first glance, the lakes of villages just outside the city look great. But even here, the artificial lakes are being deteriorated by plastics and human waste which flows untreated into the water.

We met a few people who still use their private water supply in the old city. They told us that the quality of the water was guaranteed by the movements of the stars; as long as you fill the well when the stars are in the right position, the water will never make you sick. A piece of cloth inserted in the pipes to remove dust is the only treatment they give the water. Most of us drank the cup of water that they offered (although Manisha only took a sip!); the taste was fine. This method to collect water won’t need many adjustments if people want to use it for new buildings!

The lakes and stepwells are what we will need to focus on over the coming days. With all of the pollution going on in this enormous city, how can we ensure that modern interpretations of these structures can be useful, beautiful and safe?