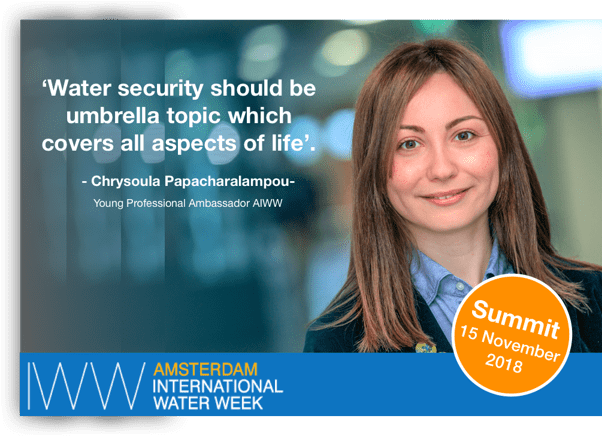 Chrysoula Papacharalampou, as Wetskills Team member (joining Wetskills-The Netherlands in 2015, supervisor of Wetskills-United Kingdom 2017 in Bath and preparing Wetskills event for Wetskills-The Netherlands 2019 during the AIWW) was awarded the title of Young Professional Ambassador of AIWW in 2017. She is one of the speakers at the AIWW Summit 2018 (in Rotterdam on 15 November 2018), dedicated to inspire us about ‘water identities’, which reflect on the human side of the current water issues.

Water identities
Chrysoula: ‘Your water identity is the way a person is shaped by aspects of life they didn’t determine themselves, but which do influence the way we think about water.’ Chrysoula moved from Greece to the UK, had to reshape her thinking about water and had to reshape it again after her move to the Netherlands. ‘People in the Netherlands live with water. It made me aware of the existence of water identities and how this differs per person.’

Whether it’s about religion, culture, economics or just the way a person is raised or educated: all aspects of life shape the way you think about water. When discussing global water security issues, these aspects should be narrowed down and taken into account. Eventually, it will increase the understanding why and how countries are handling their water issues.

Chrysoula about the AIWW Conference
The blend of diverse water related people from industries, national institutions and politicians makes the AIWW Conference a unique event. ‘It’s interesting to have people with different perspectives in the same room. At the same time it’s the most practical way of getting things done’, is Chrysoula’s take-out after attending the AIWW in 2017.

For the AIWW Conference 2019 her focus is water security: ‘It’s an umbrella topic which covers all aspects of life. Crisis, security, government, especially related to climate change. Water identities are a determining factor in creating solutions on this topic’.

Young Professional Ambassador
As Young Professional Ambassador, Chrysoula is able to create and mobilize a community of young people in order to get things done. ‘Every generation wants to do things differently. ‘My generation lives in a time where there’s an overload of information. It sometimes is a struggle to narrow it all down. On the other hand, we can also reach out to each other easily. This enables us to collaborate and communicate better and really get things done’.

Chrysoula is originally from Greece. Her father, who worked as a water scientist, took her along to his workplace, where she observed him drilling the waterholes. That’s where her interest in water started. Eventually, the complexity of the sector exited her and made her decide to become a water scientist herself.

Are you also looking forward to listen to this ambitious young lady? She will be interviewed during AIWW Summit 2018 Leadership sessions between 13:00 and 14:15.