I was hoping this day to get a lot of sleep, I was expecting that idea would be disturbed by some travelling and happy Romanians. So, the alarm ringing at 5.15, the airplane going at 9.15. No, planning to go at 9.15, but because of destination (or because of some other thing) it was departing some later. Anyway, Sandra & I arrived around 13.00 in Otopeni. After our first Bucuresti traffic experience with for instance overtaking a police car on the right, we entered to dorms of UTCB. After being installed, we went to sleep for the rest of the day, because we were very tired and we wanted to be rested next morning when the program would begin. 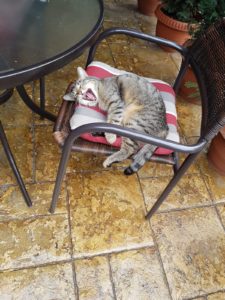 Of course we did not, because Wetskills is about making fun. So we went to a bar and to a bar and to a restaurant and went to sleep not that early, but also not that late, because we were very tired and we wanted to be rested next morning when the program would begin 😉. In the bar we met Laura and most of the Wetskills participants. We learned more about each others work or study background, we are with a quite varying group, what hopefully will make us coming up with beautiful solutions for the water issues. We also heard about what the program was planned to look like. The program sounds promising, we will wait and see what Romania 2019 will bring us.

Picture: the cat in the bar (it might represent my feelings during being there)