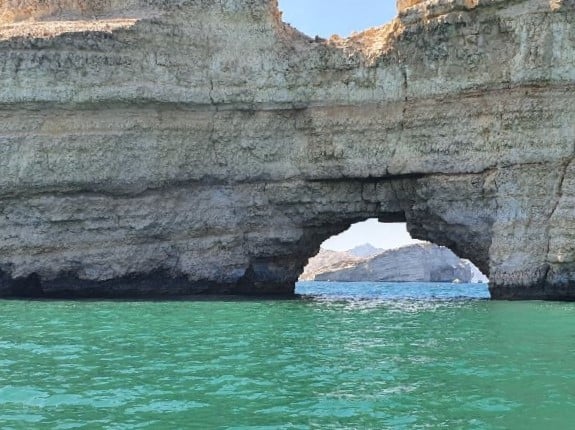 On Friday our weekend started (which is really weird, if you are used to a weekend that starts on Saturday….). Most Omani headed to their hometowns outside Muscat, so we (the dutchies) planned a nice day trip. 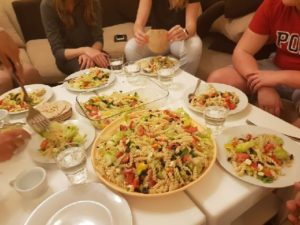 In the morning we decided to have a luxurious breakfast in the gigantic living room in our apartment. We enjoyed halloumi, simit, scrambled eggs, fruit salad and yogurt. We needed to be creative since the kitchen was relatively limited. I discovered that it is actually very easy to eat yogurt with a fork…. :-).

After our breakfast we headed towards the boat rental to go on a snorkeling trip in Bandar Al Khairan. On the boat we learned about the different rock formations at the coast line while we had to tackle the waves with our boat. Sadly I was not able to follow the interesting story about the rocks so well because I always get a bit of seasickness. Luckily we entered calmer water while reaching to our snorkeling spot. After putting loads of sunscreen we carefully entered the water, which was actually colder than expected… 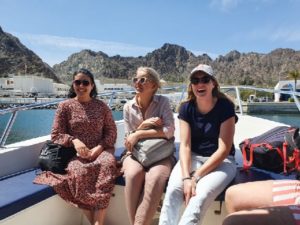 In less than one minute, we discovered a sea turtle! I never have seen a sea turtle from so close, and I was impressed by his relaxed movements. When he moved up to catch a breath I almost could tough him, and it was cute to see his small head above the water table.

After a drink and some good snacks we headed back to our apartments. We had our shower and some rest, while following the latest news about corona. We had a delicious homemade pasta salad after which we played 30 seconds. Let’s not elaborate on who won…. That night I felt in a deep sleep after such a busy and nice day.