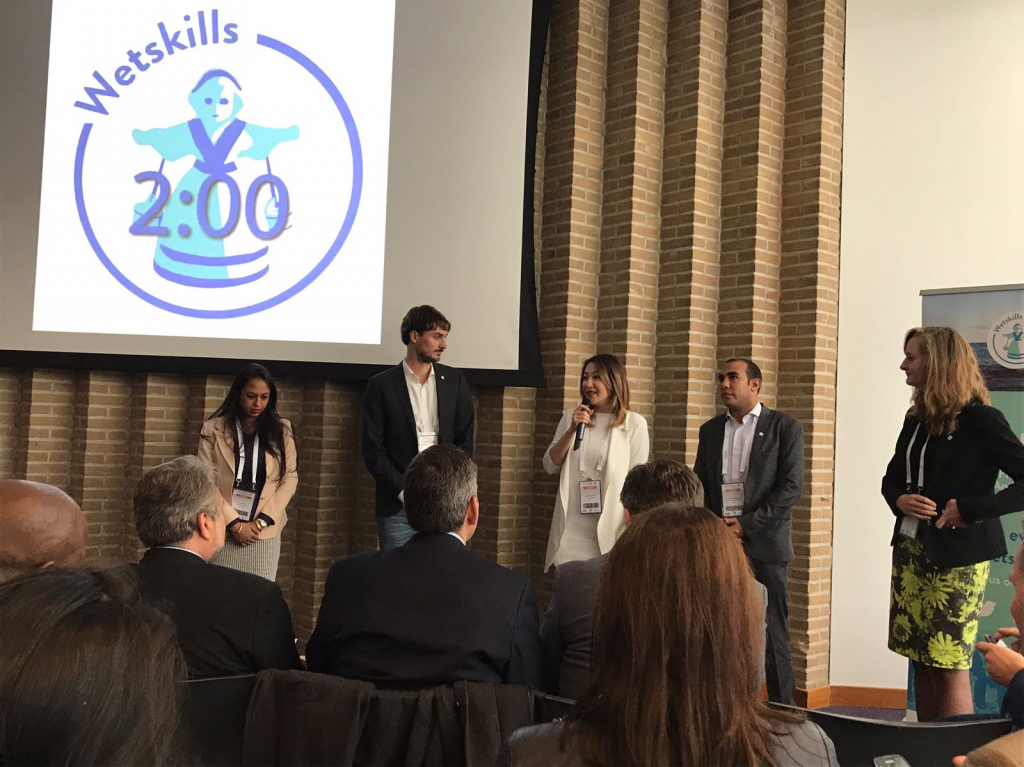 Day 11 & 12 – Finals! This is the day we’ve been working towards the whole event. Monday the 30th of October had us waking up feeling both energetic and tense. The breakfast in the hostel was amazing, as was the weather. Just the last day we had received final feedback on the posters and pitches and many teams made revisions the previous evening. The work was done and all that’s left is presenting the pitches by one team member. The designated team members were having sweaty hand palms and sat in the bus towards the RAI mumbling their pitches to themselves or their neighboring victims. Fortunately everybody wore their Wetskills pin, thanks to some attentive participants! After having arrived in the RAI with still some time left, we had time to explore the AIWW terrain a bit and get lunch. After procrastinating with lunch and getting coffee, the final moment was closer than ever and the Young AIWW kick-off started. We were briefed on the networks that exist for young water professionals and listened to inspiring pitches. Fig 2 – Waiting for the bus and tanning

Then, the moment was there. After a short introduction of the Wetskills programme by Frank, Floor and Johan the pitches were about to start: Floor let the jury pick a random number and team 6 of Province of Flevoland & Water Authority Zuiderzeeland, started with their pitch, followed by questions. In what seemed a very short time everyone presented their idea. Watching our fellow participants present was great fun and I am sure I speak for all of us that we were proud and impressed by everyone’s performance. After all the pitches were done, we answered some questions about the posters but there was not much time before the overall AIWW opening started. Why is still not clear to me but the cloakroom closed before the event of the day would end so packed with our bags and coats we stumbled in a couple of minutes late to listen to all the big guns of the water sector addressing us during the official AIWW opening. Amongst the presenters were the deputy mayor of Amsterdam, Udo Kock, DG for the European Commission concerning the environment Daniel Crespo and Dutch Prime Minister Mark Rutte.

After these many highlights of the day, some participants were thrilled for what came next: open bar and network event, no work the following morning and winding down from the busy day. Fig 5 – As can be observed, the line-up during the opening could be more diverse in the future

To finish the day, most participants had a joint dinner and some drinks afterwards. It was a good day and we’re looking forward to visiting the AIWW in the coming days.