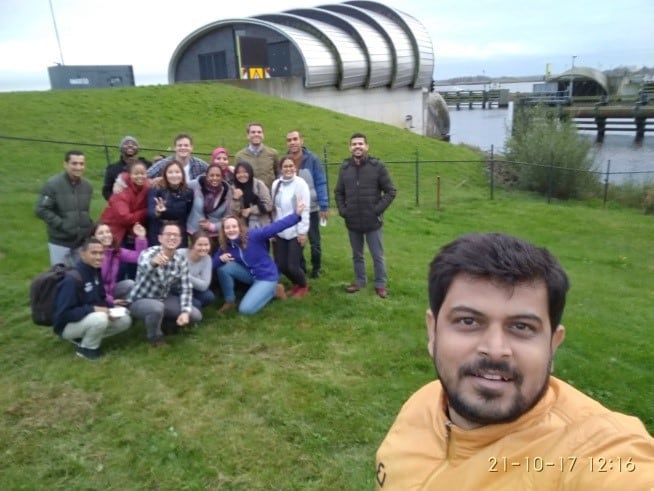 Day 3 – It was an early start after a late night with Indian delicacy coupled with beer of many varieties. It was even interesting to see 23 people gathered for the party overshooting the capacity of the house. But it was a fun receiving such a set of guests who were globally picked up. There were lot of cooperation from the neighbouring bungalows with the hope to escape their own cooking after a long day. Anyway, the bungalow 79 hosted the Wetskills team and offered its hospitality to the extent possible.

Aphelele was another attraction in the night with his skill of making double voice at a time. The definition of Mosusa had really added fun to the house. There were concerns over Mosausa what Sharon defined it: you mix Kkhina with Kkhumush it becomes Mosausa. Many of us could not understand what is Kkhaina and Kkhumush however, Mosausa was understood quite well from the definition. As a result Mosausa became the tag line for the day.

People were quite well on time to start the day. The bus carrying us was there waiting for us in the early morning while it was still dark. We were a bit astonished to see the darkness at 7:30 in the morning. It would have been a bright sun in India and South Africa by that time. Ah, this is what is called magic of nature. Our bus moved to Ramspol to see the Balgstuw created to manage flood water. We already had a through explanation of the structure the previous day. Therefore, it was easy for us to connect it to our understanding of the place. It was closed for visitors. Then our bus took us to Kampen, one of the small old Dutch cities at the bank of river IJssel. It was amazing to see how nature is visualized. The flood control barriers were a real learning for us as well as for the world. It gives us the message of how one should be prepared for future when you have enough evidence of what may happen! It is inspiring to see the confidence of people and the Dutch system to face the nature together. We really got some food for thought.
Wow, it was time for us to look around the Kampen city. We walk down the street between the market in search of some Dutch souvenirs. After one hour or so we left for the Waterway Forest (Waterloopbos). It was a long forest trail to see the various water structures developed before more than 50 years. It was interesting to know that the forest has grown on a swamp over a long time which is now a dusted forest. Netherlands has owed a lot to the nature although being in an evil eye of nature with many challenges. Finally, we got to the Schokland island which was once surrounded by sea water. It is now a UNESCO world heritage site. The site is an example of collective effort of people for cooperative commonwealth
coupled with innovative technologies and traditional knowledge. William Vercraeye, the story teller in “Farmers’ English” (as he called it), was phenomenal. He took us to the days when people in the island were struggling with the sea for their existence. This is the way some places become heritage sites, not just for
the physical structure but because of the journey people made to maintain such sites. It was quite evident from the story Mr. Vercraye told us. From his story it was evolved that we human being over the decades have lived with many differences but when it is about existence we always cooperated for collective good. It has always been reflected the spirit of unity in diversity. Wetskills also reflect the same spirit by having consensus on a common issue but in a diversity of nationality, religion, caste and creed. We all in Wetskills believe “Water is a challenge”. Having understood that, we concluded the day and we are back in Hattem.