The Sunday in Calicut was a family day, since we are a Wetskills family we went for a day out. The girls started the day with shopping and discovered that Sunday morning a lot of shops are closed. The boys went out for a good coffee and also discovered that the shops were closed, so they ended up with an ice-cream. 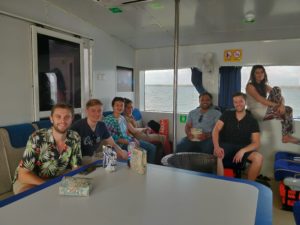 After the lunch and a high speed race in Nujoom’s car we were just in time for a boat trip at Beypore. This trip was beyond expectations in several ways. We were welcomed on the boat by a real entertainer with a couple of Indian songs and we had to participate in some local dancing. It turned out that the boat trip was more of an entertainment trip for families. Probably more than 1000 pictures were made of those interesting foreign people. 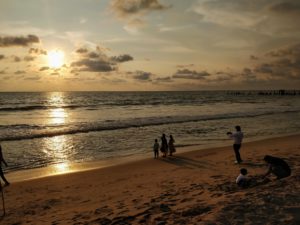 The Sunday ended with a beautiful sunset and some local food on the beach of Calicut. The place is famous because of the special stuffed mussels called Kallummakkaaya. We all enjoyed it and went to the hostel of the team members from Kerala for some take away food. After the food and drinks some more Indian and Dutch dancing was performed 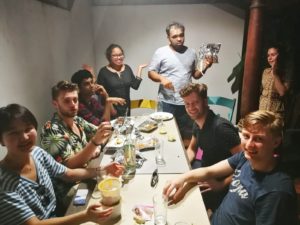