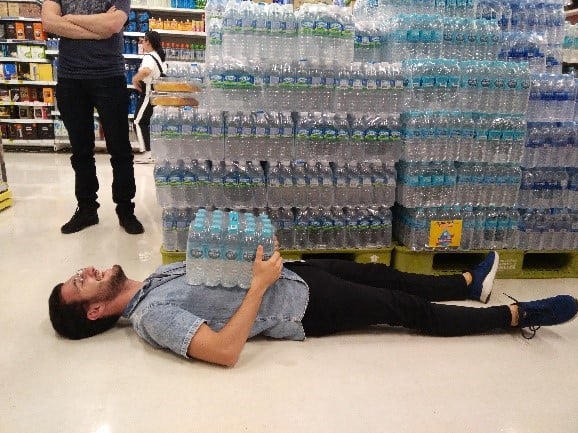 Sunday started like any other Wetskills day, all be it a little later for most teams, what with it being a weekend and all. But it was by no means a day of rest, as teams were feverishly working away on their pitches, papers and posters as the ever present deadline looms closer!

But it wasn’t all work, work, work, as Floor and Inge introduced a game to get us to have some fun, Crazy 88. Initially there were startled looks, mostly from me as I tried to calculate this in to our already busy team time plan. But Berkay took no hesitation in being our team’s (team 1) advocate, snapping away taking as many photos for the 88 tasks that had been assigned to us, which really were crazy by the way, being as creative as possible in order to get the most points over the other teams.

We (team 1) took a Korean lunch, both in food style and in the time we took. I learned that in Korean culture, lunch is very important, it takes around an hour and a half, and is usually the largest meal of the day similar to dinner in Western culture.

But we couldn’t call it quits just yet, so back to the grind stone we went! Until the evening…..

Dinner was a group affair, with 12 of us heading to a neighbouring part of Seoul known as Hongdae. Kodachaya, the restaurant, presented us a delicious selection of food on a self-service basis, and when I say self-service, this also included the beer! As the beer flowed, it was evident that we were all letting our hair down, as we all got heavily involved in

the Korean “flick a Soju lid” game! In a nutshell, flick the loose strand of the bottle lid and pass it along. Whoever flicks the strand clean off the lid is the winner and the two people either side of the winner must consume a shot of Soju. It was apparent that we were enjoying it so much that even the neighbouring table joined in! So, seeing as we were heading into the realms of such games, I introduced a variation on God save the Queen, now fondly called Save the Jangjun (Save the General). A 100 won coin with the face of a Korean general is dropped surreptitiously into another’s drink and they can’t let the General drown, so must drink all that remains in their glass, and avoid swallowing the General of course!

So all in all, whilst Sunday began as a busy one, it really did end as a fun day!