Have you ever fallen in love with a city at first sight? If you haven’t, go to Budapest. If you’ve ever been, be careful, maybe you’ll change your heart when coming to Budapest … I, personally, have never seen a city like Budapest, every corner I turn, there is always something interesting to see, or to be a good photo. So, are you curious? Let put on your walking shoes and follow us on the second day of Wetskills Hungary 2019. 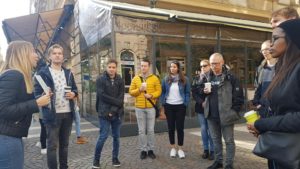 use we were exhausted from walking around the city to complete the Crazy88 (and maybe because of the Palinka dinner too). We took the #2 tram via several stations and then walked to St. Stephen’s Basilica, where we rendezvous with the rest of the participants, who base in Budapest, to prepare for the walking tour. Around 10:30 am, we met Erika, a local guide from Budapest. After telling us about the history of St Stephen’s Basilica and The Holy Right, Erika led us to meet Uncle Charlie, the statue of fat and big cop. Erika said that rubbing his belly might bring luck while touching mustache might be good for your love. However, if 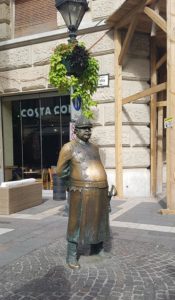 Parting Uncle Charlie, we turned left along the road leading to Elizabeth Square, a park surrounded by greenery and restaurant

ts, a short walk from the streets. Here you can see the Danubius Fountain and big Ferris wheel, The Budapest Eye’s, wherein the evening you can come to see the city at night. Right there you can also lock a love lock onto a small fence. Near the square, there is an underground bar with a roof that is a small lake. And of course, if you s

it at that bar, you can complete the Crazy88’s mission 87 “under the water but not getting wet.”

Then, we headed for the river and met The Little Princess Statue, sitting on the railing of the Danube promenade. I thought she was sitting to watch the pedestrians walking through the street. From here you can also see Tram 2, it goes along the Danube riverbanks. If you are not fit to walk with us, don’t “Hop on hop off,” just buy tickets and step on Tram #2, you can see Budapest, the sights on the other side. 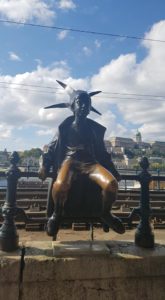 After to uching The Little Princess’s thighs, we followed the river to pass through Széchnyi Chain Bridge. About the story of this bridge, I think Wikipedia will tell better than me, so let’s skip its history. However, you should come to this bridge in the evening, it’s gorgeous. I think not only this bridge, but also the whole city. Budapest is like a young woman, beautiful and gentle in the day time and sexy at night. Crossing the bridge, we stood at the 0km of Hungary. Erika told us the story of the four “no tongue” lions, which located at both ends of the bridge, which Erika said was the favorite story of all Hungarian children. We walked up Buda Castle together follow the King’s Staircase. Don’t look for a castle in Buda Castle, there won’t be any castle at all. On the top of Buda Castle Tunnel, you can see the Széchnyi Chain Bridge straight to the most expensive hotel in Budapest, which I already forgot the name (haha), where Hollywood stars often come to stay while shooting the movies in Budapest. From here, we passed through Matthias Church and said goodbye to Erika after 3 hours of accompanying us through both Buda and Pest sides.

What do we do next?

Well, that’s what we asked each other, “what do we do next?”. We decided to go to lunch and think about that during the lunchtime. We took the bus number 16 head to Zing and ordered burgers “without a sandwich, without a burger, without tomato, and without source.” We decided to cruise on the Danube. How could we miss this when we are now in Budapest – the pearl of the Danube. Taking a tram ride to Margaret Island, we chatted for a while before boarding the boat D12 along the Danube. On the river for about an hour, we had the opportunity to admire the scenery on both sides of the river. Bázs told the group more about Budapest. Well, did you know that Buda in Budapest means “water”? 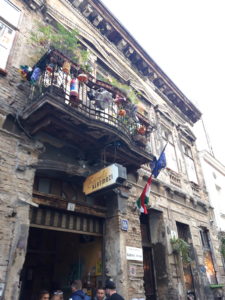 Leaving the train, we returned to the Pest side and took the train to a ruin bar, named Szimpla Kert. I think if you want to know how important clean water and sanitation are, you should come to one of the ruin bars here (haha). Out of the bar, we ended our

day with Langos, a Hungarian traditional food, which looks like a pizza but not a pizza J

So, it’s been a long story now. Sleep tight, rise, and shine tomorrow.