I’m Alaa Al Hinai, from Oman. This is my second time participating in the Wetskills program. I joined it again because I got a nice experience when it was in my country at the first time. Early in the morning, I arrived in Groningen one day before 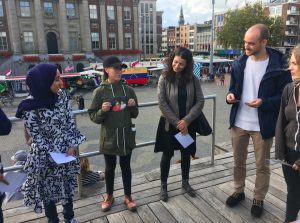 the program would start. This is my first visit to Europe. Groningen was a really nice city more than my expectation which really made me more excited to start the program. The day of the program, I was waiting for the supervisors and the other members in the lobby of the hostel and everybody introduced themselves. Our supervisor started to introduce the schedule of the program. After that, we walked around the city and Peter was the guide and he gave us information about the architecture. Then we have the super long  walk to the top of the Martini tower. I felt tired and it was the longest walk that happened in my life. Because of that, we took some videos and photos for my memory. Thank Allah that we had some nice Dutch fries at the end of the long walk with some ketchup.

My journey began a little bit later than Alaa’s. I got to the train station of Groningen on Saturday afternoon. I am already familiar with the city, since I’m Dutch, but nonetheless the tourist spots were fun to visit. This is my first time participating with Wetskills, so I was pretty nervous about meeting everybody and seeing what kind of people participate in such an event. Luckily, everybody turned out to be super friendly and fun, which became apparent during the dinner we had at the local Indian restaurant. Everybody was talking to everybody, and laughing all the time. This was also the place where two other participants joined in, and they felt like part of the group immediately. The food was good too! I already feel privileged, even after just two days, to be part of an international group of students and young professionals that all respect and accept each other.

To have a good closure of the first day, some people went to the Irish pub to have a couple beers. This is always the best way to get to know people, and that happened pretty quickly.
But since most people had to travel a lot the night before, we didn’t go all out, and went to bed pretty early. I can’t speak for others, but I feel like this is going to be an amazing experience!