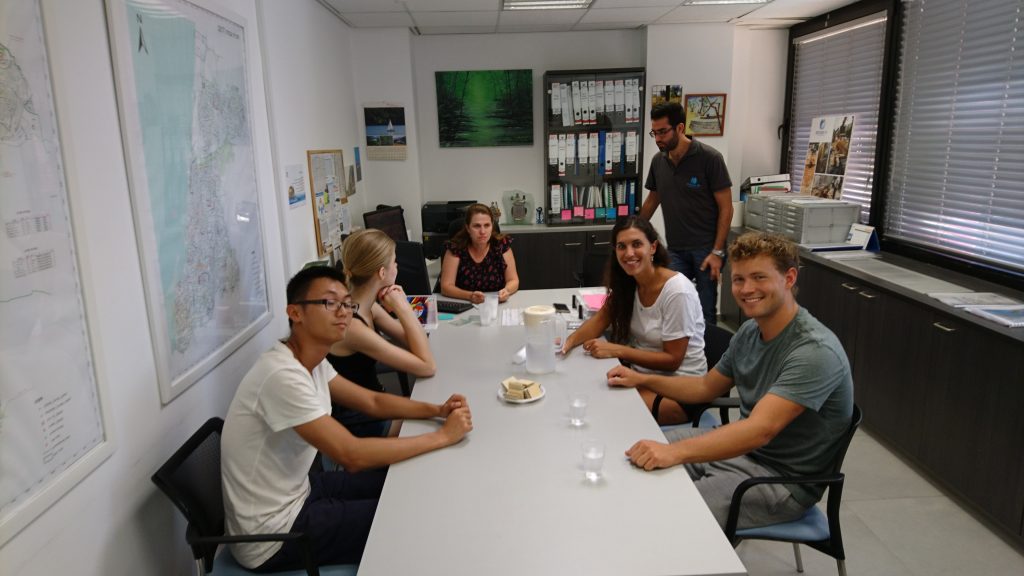 Wetskills Israel 2017 –  The next Dutch delegation

“Israel is a land of many contrasts”

Israel is a land of many contrasts. You will encounter traditional Jews dressing up in black suits who live according to the old Torah laws. That’s why public life is almost shut down on Sabbath and cafeteria still mostly offer kosher food. But the far majority is very liberal. There is a very lively gay scene, but all subcultures have their own stip of beach. On the streets people are calm and friendly, but at the same time you should not be surprised to have a young soldier sitting next to you in the bus with a machine gun on his lap. Contrasts we also encountered at our visit to our case owner in Tel Aviv, called Mei Avivim. We saw impressive skyscrapers on or way whereas the city infrastructure seems to be a mess and getting around requires a lot of patience. Mei Avivim is the water provider and the operator of the sewage system. They invited us to learn more about our case. Our task is to find a way to detect nasty sewer smells in the city, that especially can be a problem in the summer, and find a way to reduce this.

Mei Avivim is a big company with a budget of hundreds of millions dealing with advanced technology. Still the day before even their CEO came to visit us in person. This made us feel respected as it seems they take the case very seriously. But by the informality you couldn’t tell that your dealing with a boss of a big company. Status is not something that Israeli seem to express and fanciness is not appreciated. People don’t even like to dress up for weddings.

In the conference room two suited up gentlemen were just about to leave. As we entered in our shorts and t-shirts I said: “The next Dutch delegation arrives”, which disturbed them a bit. It’s hard to pinpoint exactly, but from the way they were dressed you could spot from miles away that they are Dutch. We had our laugh and they handed out business cards. Once again it proves the international reputation of Dutch engineering. After the meeting,three employees took us for a ride to get an idea of how they are maintaining the sewer system. We saw how they clean the pipes with high pressure and how they inspect the pipes with fancy robots. The heat made it more and more difficult to listen, but luck was on our side since the last site was right at the beach. This way we could treat ourselves with a well-deserved beer on the boulevard. As you can see we have a tough life at Wetskills.