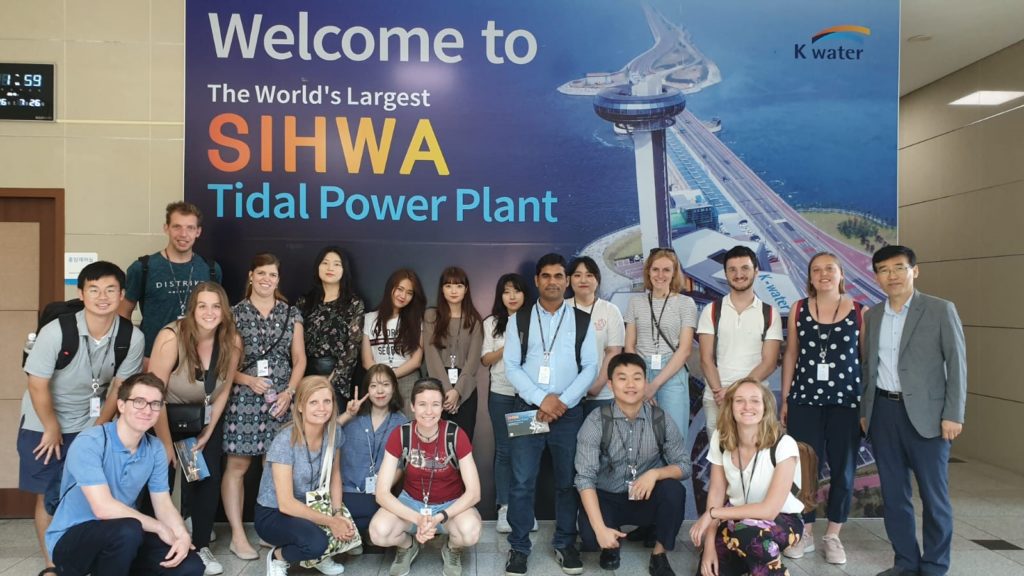 Today was the first official day of the Wetskills program in Korea. We were asked to assemble at subway station Sangwolgok. After taking the wrong exit out of the subway station and getting lost, I was the last one to join the group. Together we walked to the KIST campus, our establishment for the next 8 days. To get to know each other we each had to choose a picture from a pile that best represented ourselves. Then one by one we had to explain our choice. It was nice to see everybody chose a picture for different reasons.

After an early and some strange snacks (after getting over my initial confusion, I actually really liked the cheese-lemon cracker) we boarded a very luxurious bus to Sihwa Tidal Power Plant.  We got a very informative presentation from a nice man, whose name I already can’t remember. He also showed us the inner workings of the power plant, and took us to the top of Moon Tower, an observatory center 75 meters above the sea-level.

Next we went to Gyoengin Ara Waterway, one of Korea’s first Canals. Mr. Lee told about us the development and need of the Waterway. After his presentation we asked some very difficult question, luckily eventually he was able to satisfy everyone’s curiosity.

The bus drove us in 1,5 hours back to KIST, from the trip I remember we passed the same group of apartments about 20 times. When we returned, we joined some of the KIST staff in a Korean Barbeque restaurant. It was a very fun experience, and luckily the Korean participants where kind enough to show the Dutch people how to not burn their meat.