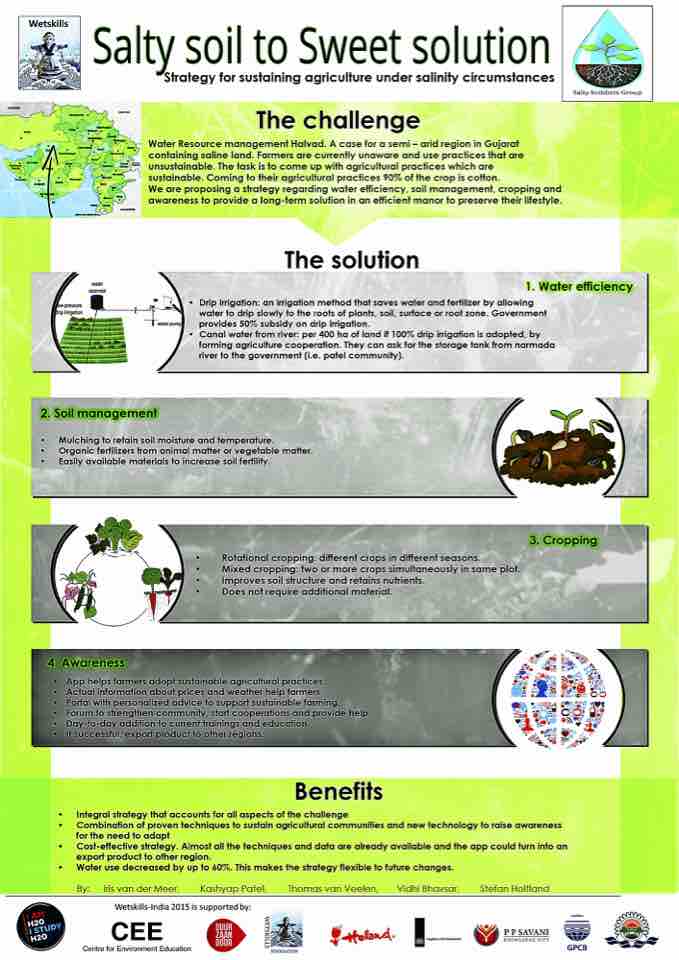 The semi-arid Halvad region of Gujarat province is home to a large farming community with two agricultural seasons annually. During the monsoon crops with high water demand are cultivated of which BT (Bacillus thuringiensis) cotton is the main cash crop (90%), followed by sesame (10%). In the winter months, crops that require less water are cultivated, such as cumin as cash crop, but also potatoes and carrots.

The Halvad region experiences low rainfall (400 mm annually) and utilizes more water than can be covered by precipitation and groundwater recharge. Consequently the groundwater table decreases (already 200 m) causing salinity to water and consequently soil. Continuing the current farming practices with flood irrigation worsens irrigation salinity. Irrigation salinity is the rise in saline groundwater and the build-up of salt in the soil surface in irrigated areas. The major causes of irrigation salinity are 1) over-irrigation of farm land, inefficient water use, 2) poor drainage, irrigating on unsuitable or ‘leaky’ soils, and 3) allowing water to pond for long periods or allowing seepage from irrigation channels, drains and water storages.

Salinity reduces water quality, soil fertility and filtration, biodiversity, and crop yields. It therefore poses a serious threat to the economic and social future of the people and towns that rely on irrigated farming for income, and to the broader community that relies on this produce.