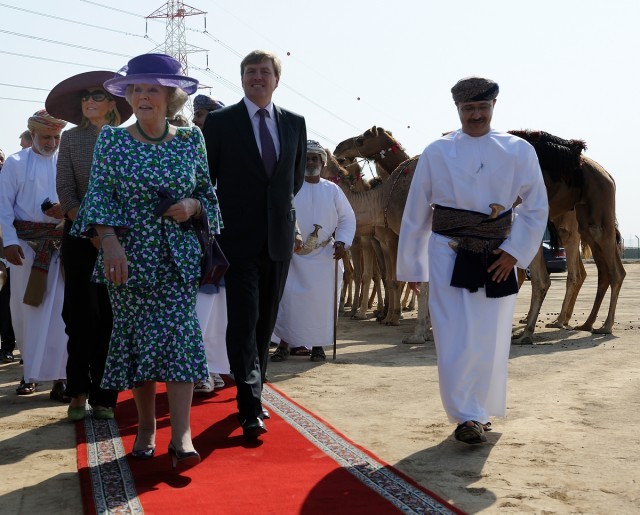 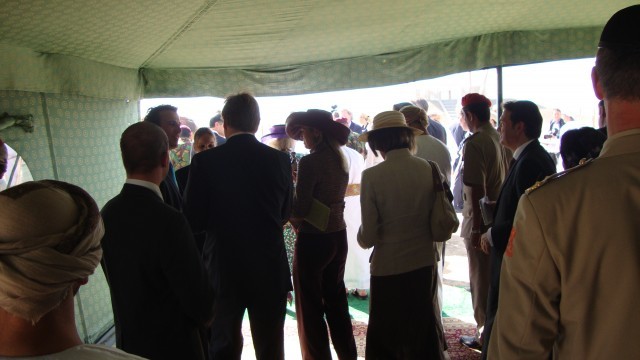 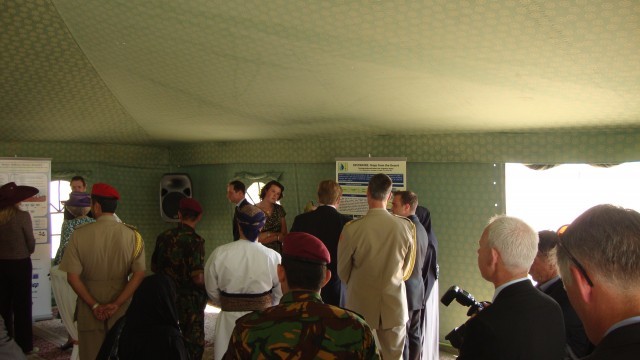 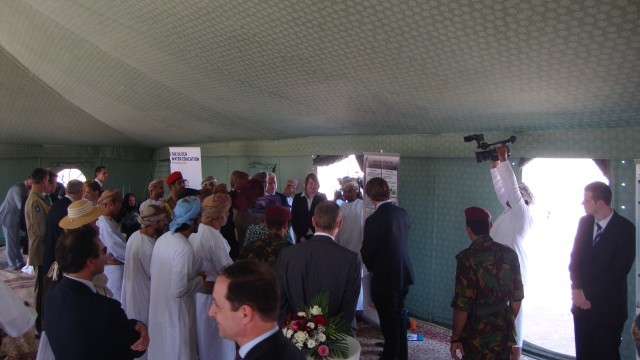 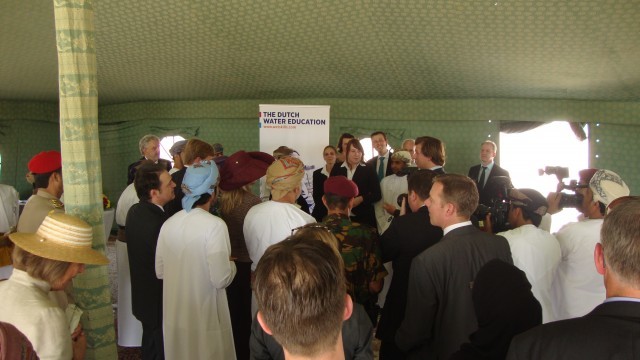 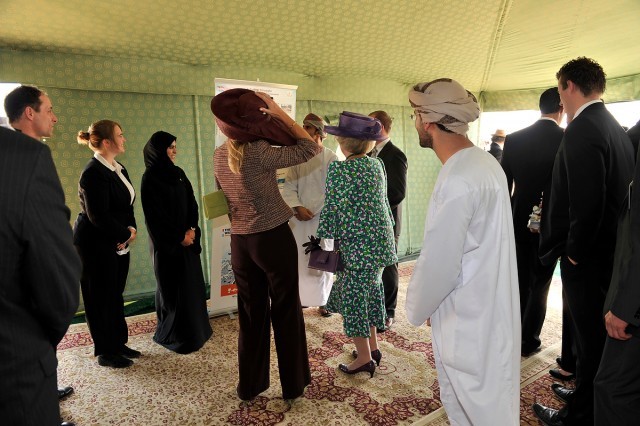 We had to wake up early this morning. Lucky to us, we could sleep one hour longer than in the planning. The programme committee of the Royal visit insisted that we took two blue busses to the Freezone (where we would meet the Royal family). Actually the drivers were not in good mood, because they lost the way two times. Because of adequate interruption by some of us, we did not end up in Dubai.

At about 9.00 the bus arrived at the Freezone. On a large sandy plain, two tents were erected with about 30-40 militaries around it. We were the first guests who arrived at the Freezone. And .. a metal detector gate in the middle of the plain as a kind of special entry to the location of the visit. It was quite surrealistic. All the students and supervisors must go through the gate, so after 15 minutes were could go to the large tent (the tent of Sultan Qaboos, when he travels through the country). 15 minutes later all the poster were ready, so we could stroll around and wait at the Queen, the Crown prince and princess. But for us, especially for students, it is quite hard to wait. So, some of the students asked for a ride on one of the camels.. After a heavily deliberation we also could go to the toilet, which was placed directly behind the other tent.

At around 10.15 the Dutch and Omani press entered the Freezone. They prepared themselves to report the Royal visit on the Freezone. (Unfortunately, they did not had an eye for our Wetskills project, because in ‘Blue Blood’ and RTL Boulevard, they did not say anything about us, shame for the Dutch press!) But no offence, we should get a marvelous experience within one hour..

At 10.50 a lot of siren and blue lights came closer.. The visit began! The Queen and the others were welcomed by the camels, a music band and a red carpet. First they went to a Dutch project called Waterboxx and after that they went to the other tent with Dutch water-related projects. After more than half an hour waiting our glorious moment was next: de Queen entered our tent. She and her follow were welcomed by Prof Ruud Schotting. He told about Dutch water education and its relation with Oman. Achmed and Ellen gave a very very short presentation about the Wetskills project, what they have reached and their opinions/feelings about it. After that, Ruud Schotting awarded the students group which has been chosen as best concept. The group, ‘Paradise Protection’ with the students  Kris Hopstaken (University Utrecht), Marjolein Stuurman (Saxion University of Applied Sciences), Zaher Al-Salmani en Deena Al-Zadjali (both Sultan Qaboos University) create the concept ‘Catch me if you can’ to increase the potential of rain catchment within the Dhofar region (southern Oman). They got an award by the undersecretary of the Ministry of Water Resources and a book with a check of 50 Rial (Omani students) and 100 Euros (Dutch students) by the Wetskills organization.

After this, the Queen, the Crown prince and princess, but also their Omani and Dutch follow walked through the tent and visited every poster. At the poster her Majesty had discussion of about five minutes with the students. Both Omani and Dutch students answered the questions. At the end Johan Oost and Janneke Duiven (the Wetskills organisation) presented the Queen, the Crown prince and princess the ‘Wetskilda’ statuette, the logo of the Wetskills and thanked them for visiting us. They were smiling for getting the statuette and glad about the results that have been achieved by the students!

After this, the Royal family went to the bus and the band played their last music. The integration of the cultures was completed when the students danced together with the local dance group, while the royal family and the guests waved good bye in their bus.

15 minutes later, the Freezone was empty and returned to silence..