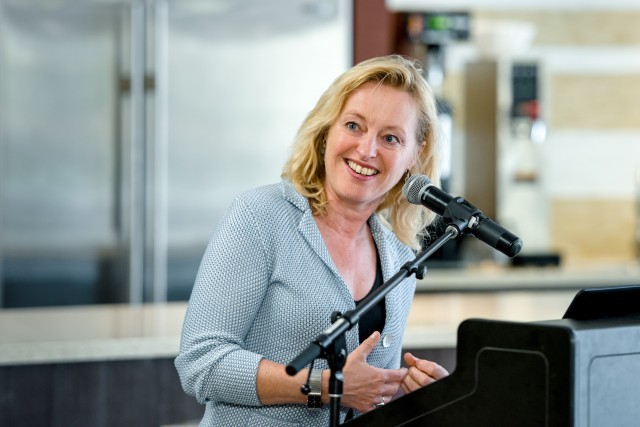 On Friday May 29th, Ryerson Urban Water hosted the Higher Education Delegation from the Kingdom of the Netherlands

The Higher Education Delegation was led by Mrs. Jet Bussemaker, Minister of Education, Culture, and Science. The Delegation came to Canada to celebrate the 70th anniversary of the Liberation of the Netherlands by Canadian soldiers on May 5, 1945.
The Delegation met with Canadian universities to solidify relationships and build new ones. Ryerson had many successful meetings and is developing MOUs to support collaborative research and student exchange.
Minister Bussemaker was presented with a framed Black Star Collection photo of Prime Minister Diefenbaker planting tulip bulbs on the front lawn of the Prime Minister’s residence in the 1960s. The Minister was ‘touched by the thoughtful gift and the kindness and generosity of Ryerson University.’
Dave Atkinson introduced Wetskills Canada 2014 as an innovative education program that supports multi-disclinary problem solving. Minister Bussemaker said ‘Wetskills is really great‘ and described it as a ‘great idea’ to bring together students and present them with challenging cases to be solved.
King Willem-Alexander and Queen Maxima of the Netherlands led the Higher Education and Trade Delegations that visited Toronto as part of their celebration of the 70th Anniversary of the Liberation of the Netherlands by Canada in 1945.