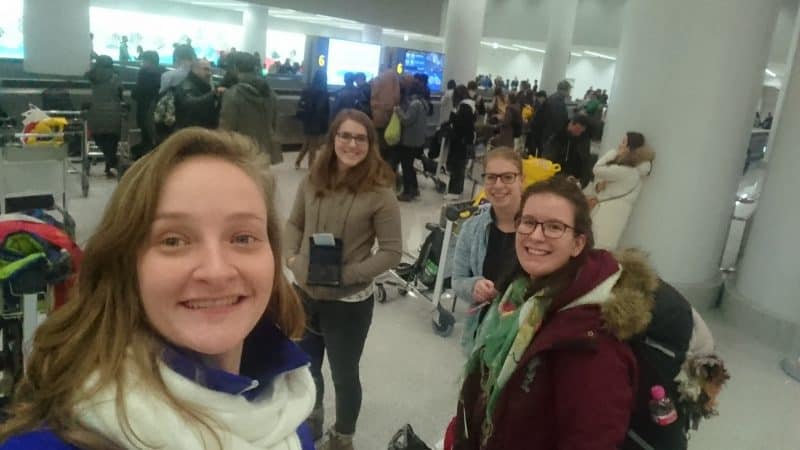 Wetskills-South Korea 2018 – Well, here I am. Sitting in a coffee bar in Seoul. Allright, I’ll admit it’s a Starbucks – I prefer to let the culture sink in step by step. Sitting at the big front window, I capture quite some confused looks from people walking by. Looking outside I gaze at the city life of South-Korea on an early Sunday afternoon. Apart from locals walking by, my view includes lots of orange taxi’s, green busses and tall grey building blocks – one of them has a huge billboard for the PyeongChang 2018 Olympic Winter Games on it’s facade. Accompanied by cute cartoon mascots of a snowtiger and a brown bear, the slogan for the Olympics says ‘Passion. Connected.’ How applicable for Wetskills that is.

For those who are wondering: my name is Floor van der Heijden, Programme Officer at the Wetskills Foundation and proud supervisor for Wetskills-South Korea 2018! Wetskills first entered my life in 2016, when I participated in the Wetskills challenge in Taiwan. After that I was asked to join the team and help organising these challenges myself. Wetskills-The Netherlands 2017 was my first edition as a supervisor, along with another new team member Frank Tibben we organised and enjoyed a great event in the Dutch delta. Now, approaching the start of Wetskills-South Korea 2018, it feels like a homecoming to Taiwan for me, yet in another role and in a (on first acquaintance slightly similar) country.

Together with Wetskills’ managing director Johan Oost, I have been preparing this Wetskills edition since October last year. As for any edition, Wetskills challenges are simply impossible without the aid of counterparts in the concerning country. In the case of South-Korea, the challenge is organised in close cooperation with the Dutch embassy, the Hongik University in Seoul and the Korea Water Forum. There have been Skype calls, lots of emails and – in the past few weeks – some chats through ‘Kakao Talk’ (the Asian version of WhatsApp, so to say) for fast contact. As I have experienced it so far, South Korean people are very well organized and structured in their work. It seems to me they like to have it all figured out, paying attention to every detail. A great partner to organise such a challenge with! I feel confident about the days to come. 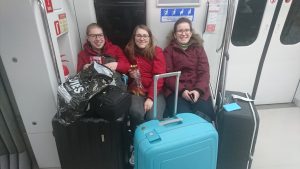 Last Friday I made my way from my home in Amsterdam to the airport, after I faced a first challenge of my own: trying to get warm sweaters, winter socks and thermic underwear in one backpack. Yes, it’s cold out here: last night the temperature dropped to -15 °C. Even for South-Korea – locals tell me – these are quite extreme weather conditions. Allthough, excluding snow or a freezing wind and including lots of sunshine, it’s actually not that bad. It stimulates the Olympic Winter-mood.

Having spontaneously met three of the Dutch participants (Eline, Rianne and Britt) at the gate, who happened to be on the same flight, I found my spot on the plane that would take us (through a short night) to the other side of the globe. After a very smooth flight we had to wait quite a while at the baggage claim, because – so the announcement informed us – the plane doors to the baggage hold were frozen solid…

Thankfully the signs at the airport contained English translation, so finding the train to Seoul was quite easy. The train tunes when arriving at stops in between were very entertaining. It made us feel victorious every single time. At the Hongik University train station we got off and I said goodbye to the three ladies, since we were staying at different hostels beforehand. I checked the signs for an exit most convenient for me to continue my way to the hostel (it turned out to be a rather big station with 9 exits in total) and decided to make my way to exit 2. It seemed I didn’t quite grasp the size of this city with 10 million inhabitants yet, given the big distance from one exit to another and the large amount of people in between. Being twice as big in size due to a stuffed backpack, I had to squeeze myself through the crowd with quite some effort. Presumably, my backpack must have hit one or two heads passing by. 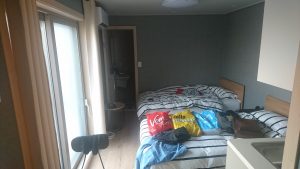 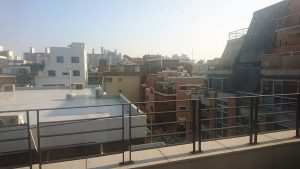 Being not only twice as big, but also twice as tall I was able to search for the exit sign. I finally stepped outside onto the sidewalk. You probably all know that feeling when you enter an unknown city for the first time: ‘Allright, so where’s north?’. As easy as it seemed on the map, navigating once you’re there is tricky, especially without access to google maps. I chose the wrong direction at first but noticed rather quickly. Once north and south where clear to me, I found my way to the hotel easily. The hostel was very comfy and warm (floor heating!) and I enjoyed a good first night sleep. The job today, Sunday, was to make the team division puzzle after having received all the case preferences from the 20 participants. It took me three cappuccino’s and two ‘stroopwafels’ at Starbucks, but I think the teams are set. Let’s see how they turn up in reality.

Looking up to the Olympic billboard again, I’m very excited to start yet another Wetskills challenge where passion for water will ‘flow’ and lifelong connections will be made. I wish all the participants the best of luck in the challenge! And don’t forget to enjoy your time in between the hard work; it’s over before you know it. See you very soon!