My name is Amir, I come from Israel, and today, September 19this my birthday. But I’ll get to that. This morning actually kicked off with our team (Dube, Kathiya, her husband Masoud and myself) being picked up by Mr. Joost Paques to visit the Paques company in Balk. Mr. Paques is our case owner, and we went to see the company to further understand our mission, to ask questions and (honestly) to have fun. After settling in a nice room with some good coffee at Paques, we set to work. We put all of our ideas up on the whiteboard, working together to try and figure out exactly how to solve our problem: attracting international companies to join a business hub started by Paques. Our research from the previous day was used and pretty quickly we managed to fill up the board with ideas, which we now had to refine into some sort of poster and marketing plan.

At this point Mr. Paques came in for some Q&A, and then took us on a private tour of the company. Paques is a company which deals with factory level wastewater treatment, for different industries. It was fascinating to see the things I learned in classes at university being put into action, and to see the scale of the projects going to thousands of liters. Going through the different departments, the lab, the construction, the R&D and to the place where the hub is intended to be established, we got to ask questions and run our ideas with Joost. It was fun to see how differently we all approached the same problems. After that we went to lunch at the cafeteria, I won’t lie to you, it is NOT what I expected.

Getting a private tour from Mr. Joost Paques 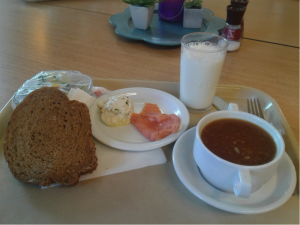 Dutch people are sparse eaters. A small cheese sandwich can mean the world to them, and this was clearly reflected in the cafeteria. There was some cheese, a slice of salmon, a small salad (innovative in Holland!) some soup and bread. Another thing I discovered is that Dutch people drink milk for lunch, they even have 2 kinds! Well… I guess when you’re in Wetskills – you learn something new every day.

After lunch we went on with some more work, trying to put our ideas into words, until we left the Paques office at 17:00. In between we got to meet some very nice Paques employees and the CEO who added their value and input into our project. We left with a clearer plan of action and a bunch of gifts. Going back to Leeuwarden through green meadows filled with cows, my mind wondered back to the question: “why should a young entrepreneur come here?”

Working on the case 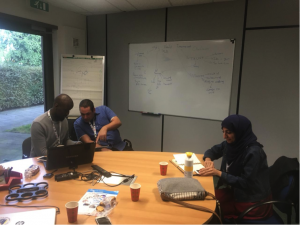 When we got back the party started. First, I met the guys from group 1 who sang “happy birthday”, followed by most of the Wetskills group going for the traditional evening Kapsalan (Shwarma with fries and cheese) in town, and then beers at the hostel. This was one to remember: people from all over the world – The Netherlands, South Africa, Israel, Romania, Oman and Myanmar sang happy birthday to me in their own language, followed by cake and beers. I will never forget it. I gave the guys some Dead Sea soap from Israel so they have a way to remember this, and how special it really was.

We topped the evening off with a brilliant drinking game which Emiel set up (rules attached). I really hope the next few days will be as productive and fun as this. I fully expect to win the competition with the best team of the bunch. Cheers!

Rules for the numbers game: 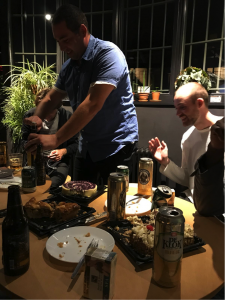 Cheers! Proost! Le’Chaim! Norok! And any other way you got to say “Drink up!”