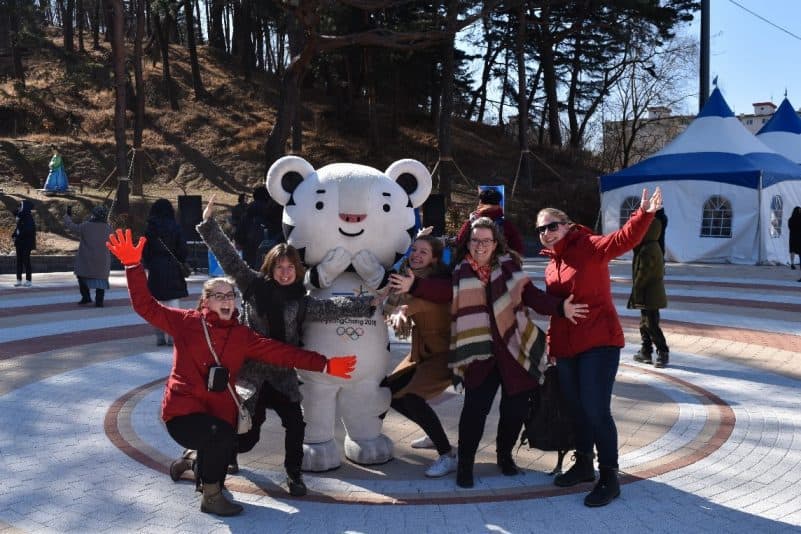 Wetskills-South Korea 2018 – After an amazing party and the exciting Wetskills finals yesterday, everyone could decide themselves today what they wanted to do. Some people went to Pyeongchang, some stayed in Donghae and I joined a group of people to go to Gangneung. There were also several people who had tickets for one of the Olympic games. We were dropped of at the train station of Gangneung, from there it was a 20 minutes’ walk to the Olympic venue of Gangneung. In front of the venue, we immediately met Soohorang, the mascot of the games, with whom we of course had to take a picture. For a small entree fee, you could enter the venue and visit all the stands and stores and take a look at the stadiums. We enjoyed ourselves a lot, although it was quite cold sometimes because it was so windy. Apparently the people who visited Pyeongchang and Alpensia almost froze to death because of the extreme cold in the Mountain cluster, so we were actually a bit lucky in Gangneung. After a while we decided to go back to the Holland Heineken House (‘HHH’) to watch the Men’s 5 km, which would start at 4 o’clock. When we walked back to the HHH, we accidentally took a detour of 3 km, so we ended up walking over 6 km. Nevertheless, we walked next to a wetland which was partly frozen, which was of course very interesting and beautiful to see. After arriving at the HHH, we watched the finals of the 5 km. We all saw Sven Kramer win gold, which was really nice to celebrate with everyone in the HHH. That evening was our last day in the HHH, which was too bad because the parties are great, as well as the atmosphere. We had a blast with everyone present, having lots of fun and a party worthy of the last evening. At 12 o’clock we went home to our hotel in Donghae for the last time with the bus. Being true party animals, the party continued in the bus with everyone joining in some karaoke songs and joking around. Eventually we arrived at the hotel. That night everyone slept like a baby, sound and safe back in the hotel.