“We had to improvise for the cooking, but it worked out really well!”

Sunday was the last day of the teambuilding weekend. After two days of fun in the bus and at Bella Vista we were finally back at UPB.

We gathered in the classroom that morning at around 10 AM and were told that we were going to play some games to get to know one another better. We were handed over a roll of toilet paper and told to take from it how much we were usually going to need in case of a MAJOR EMERGENCY if you know what i mean. So we did. Some of us got 3-4 pieces, some got 10-15, I personally took only one piece, and pulled out of my backpack 2 tissue packs to make the moment funnier. After everybody got their pieces of toilet paper, we headed on the hallways and were told that we have to say one thing about us for every piece of toilet paper (or in my case, tissues) that we had. I had 19 in total but didn’t say 19 things because… i ran out of things to say.

After we had some laughs with this game we headed back in the classroom and we were introduced to the 5 case studies. After that we were asked to take a team role test in order to find out what our strengths were, in order to divide us better in groups. We were also asked to list which case study we preferred to work on. I got case 4 which is Flood Proof Romania together with Hielke, Siebren and Daniela.

We were then given some money and told that we had this budget to buy food and prepare a specific type of dinner for tonight, in our dish was Indonesian. And so we went. On our way to the mall we looked online for Indonesian meals and decided on marinated chicken with a fruit salad and shrimp rice. We bought everything and went back to the dorm right when the storm began. Once there, we realised we had nothing to cook with. So we had to wait for Laura to come with the pans and cutlery. After she arrived we had to improvise quite a lot because there were too few pans in order for all of us to cook at the same time. We ended up cooking the chicken in the rice bowl for example. 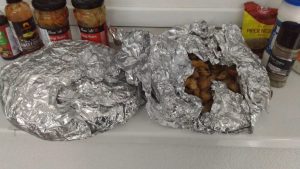 We took all the tables and chairs from the bedrooms and arranged them as a large table in the entrance hall for us to eat at. The food everyone made was absolutely delicious; there was Romanian food, Dutch food, Greek food and Indonesian food. After everyone had finished eating we had a few beers to conclude this fun day and then we all went home or in the bedrooms.