Balcony view and a cave in the park

Balcony view and a cave in the park

“Long story short: It was a good day”

It is the 12th  of May and the routine of the project is starting to settle and we are having fun in the breaks.

The day began with something strange: when I arrived to the nearest metro station, I saw the bakery store in front of the metro station. It had a broken window. After 7 stops, Daniela and I arrived at Politehnica station. The exit from the station is kind of funny because is looking just like a cave in the park. 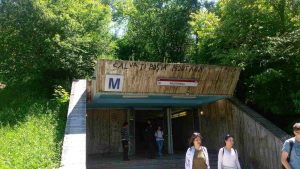 The Politehnica campus is one of the biggest campus from Bucharest. After ten minutes walk, we are at the laboratory. We are in a laboratory for water-treatment and it has a lot of small scale models in it. And today we finished our reports and the most part of the poster.

During our break we ate some sandwiches and explored the university courtyard. At the cantina it was too crowded to get some food …. so we decided to take the exit to the balcony and it was the best idea. We would have wanted to admire the landscapes from the top, all day long.

After lunch, we compared the similarities between the Netherlands and Romanian grammar and complained about the simplicity of English grammar.

Long story short: it was a good day !